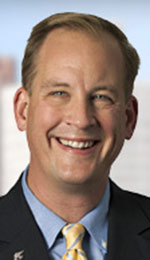 DETROIT — Steve Tupper has been named the lead legal officer and judge advocate for the Michigan Wing of Civil Air Patrol, the civilian auxiliary of the U.S. Air Force. Tupper, an attorney for Dykema, has served as assistant to the position for four years prior to the appointment.

In this new role, Tupper will advise the command staff in matters such as air operations, government contracts and other personnel matters, as well as represent the CAP in a number of proceedings. Lt. Col. Tupper has served more than 10 years in roles that include legal officer and judge advocate, deputy squadron commander, and search-and-rescue/disaster-relief pilot.

Tupper, of Bloomfield Hills, is the head of Dykema’s privacy, data security, and e-commerce practice group. He also leads the firm’s aviation transaction group and is currently chair of the Aviation Law Section of the State Bar of Michigan.