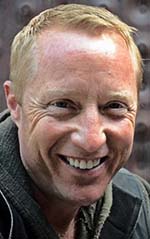 ANN ARBOR — A California startup executive, who says the Michigan entrepreneurial ecosystem is at a breakthrough point, has signed on as the new executive director of the University of Michigan Center for Entrepreneurship at the College of Engineering.

Tom Frank, who has spent more than 25 years building top-tier companies in the entertainment and technology sectors, starts his post at U-M on July 22.

Frank began his career at Procter & Gamble and later served as chief operating officer of RealNetworks in the first wave of dominant Internet companies of the 1990s. Most recently, he was president of digital consulting business White Dog Media, CEO of digital imaging platform Pink Zulu Labs Inc. and president of antipiracy software firm Vobile. He has also held leadership and board positions at the Hollywood Radio & Television Society, National Association of Television Executives and the Academy of Television Arts and Sciences.

His decision to leave California’s Bay Area for the Midwest was fueled by his belief that entrepreneurship at the university and in the state is surging.

“Great things are happening here. Michigan is ready for prime time,” Frank said. “Michigan’s entrepreneurship program is in such an explosive growth phase. The university is committed on a campus-wide basis to making it the best program in the country, with an emphasis on creating new opportunities for students.”

As executive director, Frank is tasked with enhancing the organization’s academic offerings, encouraging U-M students and faculty to participate in venture-creation activities and partnering with community organizations to positively impact the Michigan economy.

He hopes to expand the hands-on aspects of the entrepreneurship program by accelerating web-based learning and team-teaching between real-world entrepreneurs and U-M faculty. He says he plans to apply his experiences growing dynamic companies to help students take ownership of their own careers.

“The very nature of building companies and helping them identify a successful strategy to their own growth and success are the same principles that need to be applied to academic programs that prepare students to deal with these challenges when they leave school,” Frank said.

An Ohio native with close family ties to Michigan, he also has a personal interest in helping the state rebound from its recent economic downturn.

“I have relatives that are entrepreneurs in the state. We spend a lot of time having dialogues about bringing Michigan back to prestige and prominence,” Frank said. “Michigan has been slowly but consistently building a base and it’s ready to leverage it to a greater state.”

“When searching for a new CFE executive director, we were looking for a unique combination of entrepreneurial experience, leadership and passion for academia. Of all the candidates we looked at — and there were hundreds of them — Tom stood out in all categories,” Thomas Zurbuchen said, associate dean for entrepreneurial programs at the U-M College of Engineering.