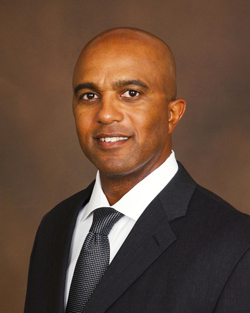 DETROIT — One of the most respected and experienced men in motorsports has joined the Chevrolet Detroit Belle Isle Grand Prix team. Charles Burns has been named General Manager of the Grand Prix and will oversee all day-to-day operations of the popular annual event, which will be held May 31-June 2, 2013.

Burns, 44, has worked with the IZOD IndyCar Series and the Indianapolis Motor Speedway for over 12 years, serving as director of security since 2003. The Indiana native has extensive operational and security experience, helping to direct 12 Indianapolis 500-mile races, seven Formula One Grand Prix events and numerous NASCAR and MotoGP races.

“We are delighted to welcome Charles Burns to the Chevrolet Detroit Belle Isle Grand Prix team,” said Bud Denker, event chairman for the Grand Prix. “Charles has a wealth of experience in motorsports and major events and his expertise and management skills make him an ideal fit for General Manager of the Grand Prix. He is also very familiar with our event and with the various stake holders in our region from working with the Grand Prix team in his role with IndyCar in 2007, 2008 as well as this past year. I look forward to introducing Charles to our sponsors and the community in the near future.”

A former Marine who worked as an Indiana State trooper for over 10 years before transitioning to motorsports, Burns is experienced in all areas event management, including operations, sponsorship, security, media/community relations and more.

“I am very excited about the opportunity to lead the Chevrolet Detroit Belle Isle Grand Prix team,” said Burns. “The Grand Prix is such a positive event for Detroit, for Windsor and the state of Michigan. The event has quickly established itself as one of the premiere races on the IZOD IndyCar Series and Grand-Am Rolex Series schedules. I look forward to working with Bud and the team, the sponsors, the city and state leadership and with the community, to grow the Grand Prix into the future.”

Burns will be relocating to Detroit from Indianapolis with his wife Michelle and children Sydney and Brayden, while beginning his new position with the Grand Prix the first week of October.