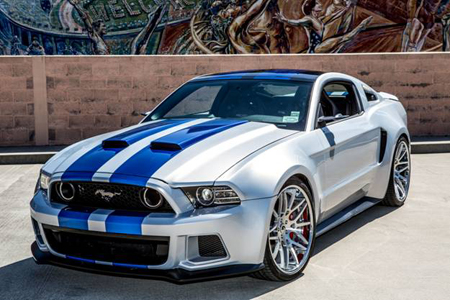 The new star’s name is Mustang, Ford Mustang, and it will star along with Aaron Paul, Dominic Cooper, and Michael Keaton in DreamWork’s upcoming “Need for Speed,” a highly anticipated action film adaptation of the popular Electronic Arts’ video game series of the same name.

The hero car is a one-of-a-kind Mustang that is being shipped directly from the studio in Los Angeles to make a grand appearance at the annual “Get Your Heart Racing” Pit Party.  The car was designed in conjunction with Ford Studio and EA/DreamWorks and features a custom-designed wide body, unique 22-inch alloy wheels and beefed up air intakes to feed the supercharged engine under its twin-nostril hood.

As star of “Need for Speed,” the Mustang is expected to be a big draw to an already big event. Pit Party guests can also expect a decadent evening filled with sumptuous food, premium cocktails, music from the popular Mega 80’s band and an auction filled with once-in-a-lifetime opportunities.

“Previewing this one-of-a-kind movie star car adds to the excitement and is a great example of the cooperation we get from our lead sponsor, Ford Motor Co., and from other sponsors and participants who support the work we do,” said Sandy Hudson, chief development officer at Henry Ford Hospital.  “Get Your Heart Racing is a unique event and it promises to be better than ever this year.”

“Need for Speed” marks an exciting return to the great car culture films of the 1960s and ’70s.  The story chronicles a near-impossible cross-country journey for the film’s heroes — one that begins as a mission of revenge but proves to be a journey of redemption.

“The Need for Speed movie will embody everything that fans of action racing films want to see – hot cars, high-stakes street racing and mind-blowing stunts,” said Scott Waugh, director of the film. “The adrenaline-fueled story across America will keep viewers on the edge of their seats.”

The Get Your Heart Racing Pit Party will be the second time that the vehicle has visited Detroit as portions of the film were shot in and around the city this summer. The celebrity Mustang has a robust schedule of public appearances after Get Your Heart Racing concludes. The vehicle is planned to be auctioned by Barrett-Jackson shortly after the film’s release date of March 14, 2014 with proceeds benefitting The Edith and Benson Ford Heart & Vascular Institute.

Get Your Heart Racing is a fundraiser co-produced by Henry Ford Health System and Ford Motor Co. in support of the Edith and Benson Ford Heart & Vascular Institute at Henry Ford Hospital. The Pit Party is followed by a day at the track on Saturday, Sept. 14 at Ford’s Dearborn Development Center and Proving Grounds. The track event features celebrity drivers offering thrill rides, driving demonstrations, and opportunities for participants to get behind the wheel themselves to experience select Ford vehicles.  Honorary Chairpersons of this year’s event are Paul and Lynn Alandt and Raj Nair, Ford group vice president, global product development.

For more information and to purchase event tickets, visit GetYourHeartRacing.org or call Kim Streich at 734-246-9639.  The website also offers a complete list of live auction items and celebrity drivers.