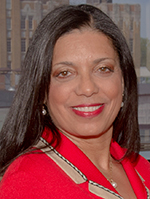 She attended the University of Detroit and is a graduate of the Minority Business Executive Program at Amos Tuck School, Dartmouth College and Leadership Detroit Class XXIII.