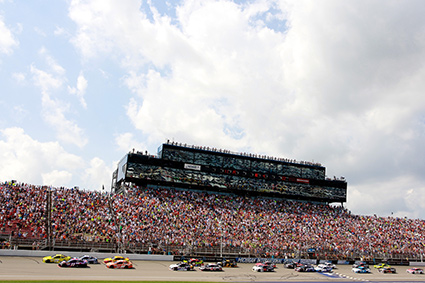 NASCAR announced agreements this week that MIS is one of 23 tracks in the nation and the only one in Michigan to host NASCAR Sprint Cup Series races. The sanction agreements provide guests and partners of each track the knowledge that track will host NASCAR events the next five years.

“We take our responsibility to the fans and to our partners very seriously to do our part and ensure the sport is healthy, strong and growing. So we are thrilled to continue bringing NASCAR to Michigan for at least the next five years, just as we have done since 1969,” says MIS President Roger Curtis. “This is an exciting time for the sport and we proud of our partnerships with FireKeepers Casino Hotel and Pure Michigan, to name a few, as we look forward to being a part of the future with NASCAR.”

Curtis says the NASCAR races anchor a year’s worth of events that will continue to bring business and drive tourism in the state, helping to showcase all the great things the State of Michigan and all the track’s partners have to offer.

The first of the track’s two NASCAR weekends is June 10-12 with the Corrigan Oil 200 ARCA Racing Series on June 10; NASCAR XFINITY Series on June 11; and the NASCAR Sprint Cup Series FireKeepers Casino 400 on June 12.

The Sprint Cup Series will wind up its summertime stint at MIS on August 28 with the Pure Michigan 400. The Camping World Truck Series Careers for Veterans 200 presented by The Cooper Standard Foundation & Brad Keselowski’s Checkered Flag Foundation is on Aug. 27

Fans at the MIS track in 2015 can renew tickets and camping for the 2016 season now at the lowest price until Nov. 4. Tickets will go on sale to the general public on Jan.18.