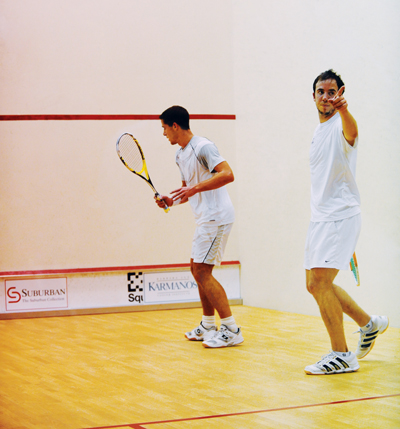 Squash may not be the most popular sport — football takes the crown in the United States, while soccer is king throughout the rest of the world — but it still draws sizable crowds and generates considerable interest. Take the annual Motor City Open, hosted by the Birmingham Athletic Club every February. The tournament, which includes a $30,000 purse (up from $5,000 for the inaugural event in 1999) and a Rolex watch from Greenstone’s Fine Jewelry in Birmingham, draws 32 players from such distant locales as England, Spain, and Egypt.

“The first year, we drew 100 spectators, but now we’re getting 400 people, more sponsors like The Suburban Collection, and we’ve had past participants reach the No. 1 ranking,” says Peter Schmidt, co-chairman of the Motor City Open with Mike Beauregard. “It’s a great economic stimulus for our club and the region at large.”

Drawing many of the world’s top players (this year’s competition was won by Borja Golan of Spain), the Motor City Open offers the third-largest purse in the United States and the 11th-largest in the world. “We draw people from Lansing, Toledo, Canada … the Detroit Athletic Club and the Franklin Athletic Club,” Beauregard says. “We also make a sizable gift to the Barbara Ann Karmanos Cancer Institute.”

The club, founded in 1955, has 350 members, 200 of whom are active in squash. Located next to Oakland Hills Country Club, the BAC’s membership includes a broad spectrum of businesses, including insurance agencies, law firms, brokerage houses, and private-equity firms. “We’re another institution in the region that helps drive the economy,” says W. Scott Schilling, BAC president and sales director for STMicroelectronics Inc. in Livonia.