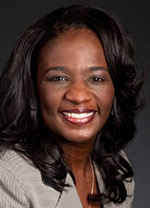 Robinson brings a wealth of experience, having spent nearly 15 years at Home Depot where she created its first supplier diversity department and supporting strategy, before founding Give & Receive, a non-profit organization that connects individuals and corporations to various charities. Prior to that, Robinson was the youngest and first African-American attorney employed by Wal-Mart as corporate counsel.

She has served on numerous boards, including  the National Minority Supplier Development Council, National Center for American Indian Enterprise Development, as well as Women’s Business Enterprise National Council for which she was a member of the executive committee, and Diversity Information Resources where she served as vice-chair.

A native of Oklahoma, Robinsons will be relocate to metro Detroit from Atlanta. She earned her Bachelor of Science in organizational administration from Oklahoma State University and holds a JD from the University of Kansas.