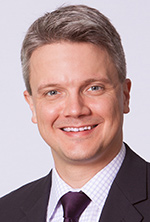 Julian Davis Mortenson has joined Miller Canfield as of counsel to the firm’s international disputes group.

Mortenson, of Ann Arbor,  is active in both international arbitration and domestic constitutional litigation. He has served as arbitrator, counsel, and expert witness in commercial and investor-state disputes and has litigated transnational matters in the U.S. courts, including actions involving the enforcement of foreign law and foreign judgments. He was the lead counsel in Caspar vs. Snyder, which required Michigan to recognize the marriages of more than 300 same-sex couples.

A full-time professor at the University of Michigan Law School, Mortenson, previously was an associate at Wilmer Cutler Pickering Hale and Dorr LLP in Washington, D.C. and New York City. He also served as a law clerk to Justice David Souter on the U.S. Supreme Court.