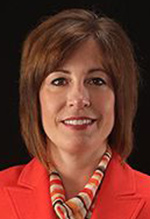 Shanlian has nearly 20 years of experience managing and improving skilled nursing facilities as well as assisted and independent living communities throughout Michigan. Previously, Shanlian served as the deputy director of the Aging and Adult Services Agency, where she implemented initiatives for culture change in skilled nursing homes across the state.

Shanlian’s family has a long history of military service, including her father (Air Force and National Guard) and her brother (Marine Corps Reserve). Her stepbrother, PFC William Davis from Grand Rapids, was killed in Iraq in 2007.

Shanlian holds a bachelor’s degree in dietetics and a master’s degree in administration, both from Central Michigan University.