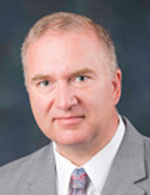 LANSING — Kevin Elsenheimer, chief deputy director of the Department of Licensing and Regulatory Affairs, was unanimously approved by the Michigan State Housing Development Authority’s board to serve as the organization’s new executive director.

The agency manages a nearly $4 billion balance sheet and enhances Michigan’s economic and social health through housing and community development.

Elsenheimer, of Traverse City, has been serving as LARA’s chief deputy director and director of the Workers’ Compensation Agency. As chief deputy director, he has overseen the Office of Policy and Legislative Affairs, the Office of Regulatory Reinvention, the Michigan Liquor Control Commission, the Michigan Administrative Hearing System, and Freedom of Information Act responses. Prior to serving in that capacity, he served as minority Leader in the state House of Representatives, representing the 105th District.

Elsenheimer is a former assistant prosecutor and owner of a law firm that represents municipalities throughout the state. He attended Michigan State University and Northwestern Michigan College, receiving a law degree from Wayne State University Law School.