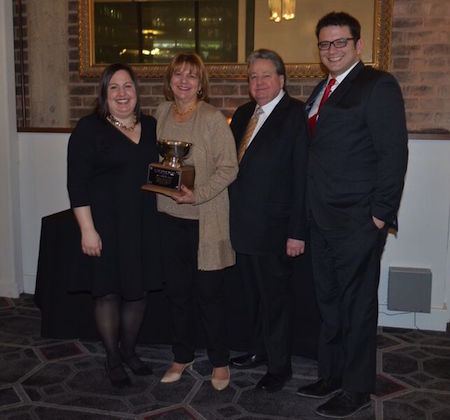 The Lansing-based Michigan Restaurant Association (MRA) awarded Janet Sossi Belcoure the Distinguished Service Award (DSA), the highest award given by the association, on January 21 at the MRA’s annual Chairman’s Dinner at the Detroit Foundation Hotel.

Sossi Belcoure, a pioneer in the restaurant and foodservice industry with a valued voice and sought-after opinion within the City of Detroit, began her career by spending time in her father’s restaurant on a stack of telephone books in order to be tall enough to reach the table.

After graduating from Michigan State University, she began working for her farther, Hector Sossi, as the third generation of the Sossi family to own and operate the Roma Café – a proprietorship spanning 100 years.

The Roma Café closed last year as the oldest Italian restaurant in Detroit. However, the iconic Detroit landmark will live on in its newest iteration as Amore de Roma.

Sossi Belcoure played an integral role in ensuring the Roma tradition she and her family cultivated will live on for generations to come. She has been part of the restaurants and foodservice industry for 38 years and has served on the MRA Board of Directors where she was chair from 2012-2013. Additionally she is a founding member of the recently established Detroit Restaurant Association.

Chosen each year by the previous winners of the award, the Distinguished Service Award recognizes individuals who have provided exceptional and continuing leadership, vision, and commitment to Michigan’s foodservice industry.

The MRA was founded in 1921 and represents approximately 4,500 Michigan foodservice establishments. The industry plays an integral role in Michigan’s economy, employing more than 435,000 people and generating $15.9 billion in annual sales.