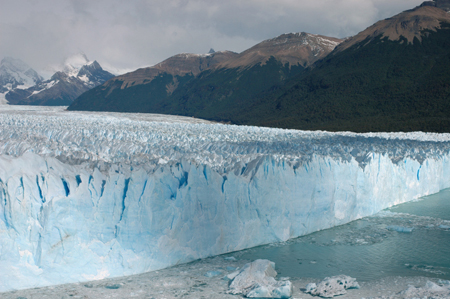 MIDLAND — Videographer and Midland resident Peter Sinclair will join a scientific team on the Greenland ice sheet this summer, to photograph and film research into the causes of increasing ice melt and the possible contribution to sea level. Along for the ride will be well-known climate activist and writer Bill McKibben, who will cover the journey for Rolling Stone magazine.

DarkSnowProject is  the name given to this initiative by Greenland expert and team leader Jason Box, Ph.D., formerly of the Byrd Polar Center at Ohio State, now of the Denmark Geological Survey.

Box and the team will be sampling snow at key points on the ice sheet to determine the causes of an decreased “albedo,” or whiteness, that has been observed in the past decade. A darkening of the ice causes more solar energy to be absorbed, and more melting.

Last summer, the entire surface of Greenland turned to slush and began melting, as even the highest and historically coldest areas saw temperatures as high as 42 degrees F. Human-caused climate change is generally regarded as the most likely reason for the increased melt observed on Greenland and glaciers worldwide in recent decades.

There are several mechanisms that are known to darken arctic ice. Natural causes like particulates from ocean spray, desert dust, pollen, and soot from natural forest fires, as well as industrial pollution deposited on the ice, have been documented.  However, as climate change accelerates, more acres are being burned by wildfire, on the average, each year.

The DarkSnow team will be investigating whether increased soot from expanding wildfire in recent years has been contributing to the darkening, and the pace of melt. Such an effect would be what scientists call a “feedback” — more global warming, more wildfire, more soot, causing more warming, and even more wildfire.

Box recruited Sinclair, a videographer whose simple and entertaining explanations of climate science have earned him a worldwide audience, to document the expedition in video and photos. Sinclair’s YouTube series, “Climate Denial Crock of the Week,” pokes not-so-gentle fun at those who doubt the mainstream science of global warming and climate change.  The series has become a favorite of scientists, and is being used in many colleges and universities to teach classes on the issue. Sinclair has been invited to scientific conferences to help scientists better explain the issue to the public.

In 2012, Sinclair inaugurated a new companion series titled This is Not Cool through the Yale Forum on Climate Change and the Media. There are now well over 100 videos, each three to 12 minutes long, in the combined series.

DarkSnowProject has been unique in that the expedition has been funded through private donations and Internet crowd sourcing. Sinclair has produced several YouTube videos describing the project, and the need for funding. Donations can be made at darksnowproject.org, and by texting “darksnow” to 50555.

Fundraising is still ongoing, and the researchers hope that additional funds will allow more detailed sampling and collections.

The researchers will be on the Greenland ice during the season of peak melt, late June and early July.