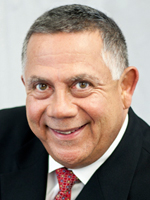 DETROIT — The Consul of Mexico, Vicente Sanchez Ventura will present the Mexican government’s prestigious Ohtli Award to Frank Venegas, Jr. on March 21.  As the Chairman and CEO of the Ideal Group and grandson of Mexican immigrants, Venegas’ efforts in the Mexican and Hispanic community is defined by his background as a Detroit entrepreneur, business leader and Southwest Detroit advocate for education and community sustainability.

Venegas, upon hearing the announcement stated, “The Ohtli Award is a tribute to Southwest Detroit, an international gateway. It celebrates our diverse paths and partnerships. Many families have links to Mexico dating back before the 1900s. It is a significant award that recognizes how business and community working together can provide opportunities in one of Detroit’s fastest growing areas.”

In 1917, Venegas’ grandparents emigrated from Mexico to Southwest Detroit via Kansas City, MO. His grandfather worked at the Ford Rouge Plant and his grandmother ran a restaurant and worked at Banner Linen, formerly located near the old Detroit Tiger’s stadium. They were known as the ‘Madrina’ and ‘Padrino’ of the neighborhood, often helping neighbors in need.

As a Detroit native, Venegas attributes his start in business to luck. In 1979, he won a Cadillac Coupe deVille in the Livingston County Builders’ Association Holiday Raffle. A few days after winning the car he sold it and used the proceeds to start his first business. In 1995, he opened his first Detroit operation, located where the Cadillac Clark Street Assembly Plant was once located and the Cadillac Coupe deVille was built. The Ideal Group’s new headquarters opened at 2525 Clark Street in 2000.

Following his cultural heritage and family legacy, Venegas, helps underserved and underprivileged, opens doors to opportunities through education, mentoring emerging business leaders, and neighborhood initiatives in Southwest Detroit. Venegas believes in making a pathway to citizenship for Undocumented Residents. Recently, Venegas and other business leaders collaborated and helped 31 undocumented residents file their paperwork for the DREAM Act, allowing them to legally work and pay taxes. Among the candidates were university students, graduates with Masters Degrees and one PhD candidate.