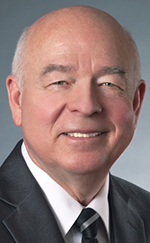 LANSING —John C. Hertel, general manager of the Suburban Mobility Authority for Regional Transportation, known as SMART, was elected chairman of the Huron-Clinton Metroparks Board of Commissioners.

Hertel, of Lenox Township, has served five terms as a Huron Clinton Metropark Authority Commissioner, starting in 1983, when he was appointed to represent Wayne County.  Hertel has held leadership roles at the Regional Transit Coordinating Council, the Michigan State Fair, the Macomb County Board of Commissioners, and the Wayne County Board of Directors. He was also a professor of government, environment, and technology at Lawrence Technological University, and the Public Affairs Producer and editorial director of WXYZ-TV (Channel 7).