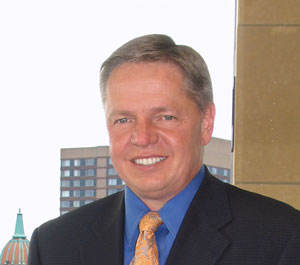 The battle against heart disease is one of the top health care initiatives in metro Detroit and around the country, and while the region is a national leader in fundraising, research, and educational programs, no one is resting on their laurels. “We are in the midst of expanding our communication programs to teach more people about the dangers and symptoms of heart disease and strokes as well as relaying the value of living healthier lifestyles,” says Bob Paul, president and COO of Compuware Corp. in downtown Detroit, and chair of the Heart Ball, the major fundraising event for the southeast Michigan American Heart Association — to be held on April 16 at the Westin Book Cadillac Detroit.

Paul recently spoke with DBusiness magazine editor R.J. King about heart disease and strokes, the physical and financial impact of living healthier lives, and how more people can get involved in supporting the American Heart Association.

DB: You’re returning for a second year as Heart Ball chair, what drives your support?

BP: It’s quite an honor given the level of people involved, and the commitment exhibited across the region and state. When you consider the (economic) recession has impacted metro Detroit more so than most other communities across North America, and that our region is routinely the top one or two supporters of charitable causes, it goes a long way in demonstrating how caring people are here. Like Heart Balls in the past, we pulled together some of the brightest and most influential leaders. They really came out with their support and got their constituencies involved. Last year our goal was to raise $1 million at the Heart Ball, and we raised $1.2 million, which was fantastic.

BP: Last year we cast a pretty big net. This year, even though we’re still in the midst of a recession that we’re now starting to climb out of, we’re striving to get more people involved. One thing we’re doing is not relying so much on big contributions from larger companies. We hope to exceed our fundraising goal by tapping into more constituents. That could mean the average gift from corporations and individuals drops a bit, but we’ll be bringing the important message of the AHA to more people.

DB: How can the AHA better communicate the message that heart disease can be cured or limited through healthier lifestyle changes?

BP: We’re going to be doing more in the form of public relations and communications. We get back close to $6 million in public and charitable support each year, which is used to support educational programs. Michigan’s No Smoking Ban (under way since May 1, 2010) helps, plus the AHA is focusing more on child obesity in terms of more programs within schools. The next big step is viral Internet opportunities. We’re looking to better leverage the Internet to get the brand message out there. The next step for the AHA is to embrace the Internet and get the message out about child obesity, not only among children, but also among adults. Heart disease and stroke is the number one killer in America. The money we raise and receive goes to support education, the new communications program I referred to, and a tremendous amount of research. All of that benefits people and health systems across the state.

DB: How does Compuware communicate the message of living a healthier lifestyle?

BP: We have our Compuware Can effort, which is an umbrella program for charitable activities. Each of the events we support throughout the year we actively promote through our online portal. We address health issues, and how that affects our overall health insurance costs. We publish a monthly newsletter, and we have various health initiatives on our online portal that reaches our 4,300 global employees. Certainly, the Heart Ball is a major initiative and we (the company) contribute $100,000, while our employees give individually. We also have efforts like our “Walk The Stair Program,” where we encourage people to take the stairs when they’re traveling to and from meetings and other activities.

DB: Why is metro Detroit one of the national leaders in supporting the battle against heart disease and stroke?

BP: It’s astonishing to see metro Detroit is first, second, or third in terms of charitable support year after year. It just shows you what kind of people we have here, and the level of commitment and responsibility we share. This is one anecdote on why and how Detroit is going to rebound so well. We’ve been hearing about how Detroit has struggled, but you can really see and feel our comeback. I’m very encouraged.

For more information about the 2011 Heart Ball and other southeast Michigan American Heart Association activities, please visit www.americanheart.org or call (248) 827-4214.