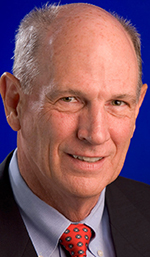 “After conducting an extensive search process that resulted in an impressive slate of internal and external candidates, our board is pleased to name Ike Evans as Meritor’s chairman, CEO, and president,” said David W. Devonshire, presiding director of the Board. “The board is confident that Ike’s wealth of relevant operational, manufacturing and management experience, combined with the strength and continuity of the current management team, is the right formula to lead Meritor into the future.”

“I strongly believe in this company and M2016 – the three-year plan we are executing designed to improve earnings, increase revenue and strengthen our balance sheet,” said Evans. “During the past three months, I’ve spent a great deal of time getting to know the leadership team here at Meritor, and I look forward to working with them as we move closer to the level of performance we want for our shareholders and for ourselves.”

Evans previously served as president and chief operating officer of Union Pacific Railroad from 1998 until 2004 and as vice chairman of Union Pacific Corporation from January 2004 until his retirement in March 2005. From 1989 to 1998, he served in various executive positions at Emerson Electric Company, including senior vice president, Industrial Components and Equipment.  He also spent 21 years serving in key operations roles for General Motors Corporation.