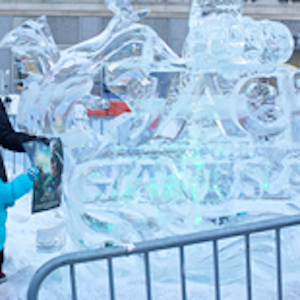 The thirteenth annual Meridian Winter Blast, presented by Quicken Loans, has been moved up several weeks and is now scheduled to coincide with the final weekend of the North American International Auto Show — January 20-22.

“The new festival date takes us back to our roots when we held the first Winter Blast in 2005 during the same timeframe,” Jon Witz, Meridian Winter Blast festival organizer, says. “This is all about activating the downtown area. Nearly 100,000 people come to Cobo Center for the last weekend of the North American International Auto Show and we anticipate Meridian Winter Blast’s move to an earlier date this year will also encourage Auto Show goers to visit Campus Martius Park.”

“Winter Blast is returning to Detroit this year in a bigger and better way than ever before, and we’re thankful to play a role in its transformation,” said Helen Johnson, Quicken Loans vice president of community activation. “It’s great to see two of the season’s biggest events pair up for what is sure to be the most exciting winter weekend in Detroit.”

The event will feature a new layout and several new winter attractions, including the 30-foot-high Meridian winter slide, where thrill-seekers can ride through a pitch-black tube, dropping them quickly from a steep 40-degree angle at speeds of up to 20 miles per hour. Those feeling less adventurous can also opt for a 30-degree drop slide that still promises to excite festival goers.

There will also be a 30-foot by 40-foot ice maze located on Woodward Ave. south of Campus Martius, which will be created by hundreds of large ice blocks. In the evenings, adults can enjoy the Bedrock Ice Bar located on Cadillac St. north of Cadillac Square and will include a 16-foot bar made of carved ice, as well as tables, chairs, carafes, and drinks. Portable heaters and music will also be provided 6-11 p.m. Friday and Saturday and 6-9 p.m. Sunday.

Admission to the Meridian Winter Blast is $3, three canned food items, or one children’s book, which will help to fight hunger and promote literacy in Metro Detroit.