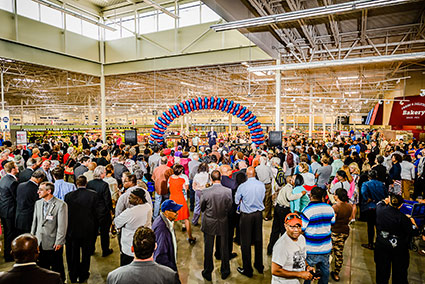 DETROIT – Continuing its investment in Detroit, Meijer opened a new supercenter today on the city’s northwest side.

The nearly 200,000-square-foot store is located near the Old Redford and Brightmoor neighborhoods and provides local residents the opportunity to walk – rather than drive – to get fresh groceries.

“We always work hard to find locations that will best serve communities, so we are proud that this neighborhood store will provide our new neighbors a fresh grocery option,” Co-Chairman Doug Meijer says.

Built on the site of the former Redford High School, the new store is the latest of 11 new stores the retailer is opening throughout the Midwest this year. The new store provides customers with quality merchandise, more than 600 types of fresh produce and a full-service, drive-thru pharmacy that puts family health care first, including walk-in health screenings, comprehensive immunizations and specially trained diabetes-care pharmacists.

“The opening of a second Meijer store in Detroit is the latest example of our ability to attract new investment in our neighborhoods,” said Detroit Mayor Mike Duggan. “Having two Meijer stores to serve as retail anchors is filling an important need in our city and creating significant job opportunities for Detroit residents as well.”

The new Detroit Meijer, at the intersection of Grand River and McNichols Avenue, and will create more than 300 jobs.