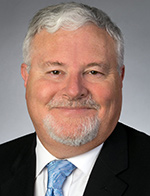 Attorney Euel Kinsey, from McKeen & Associates, has joined The University of Detroit Mercy Law School as an adjunct law professor.

Kinsey has nearly 30 years of experience in malpractice law, and spent nearly 15 years working on medical litigation. He has worked as an assistant prosecuting attorney for Wayne County, and as an associate at a large law firm where he litigated Workers Compensation cases and labor law issues.

Kinsey is licensed in six states besides Michigan and practices in five. He holds an AV Preeminent rating with Martinale Hubble, its highest rating in legal ability and ethical standards. He has also been named a DBusiness magazine Top Lawyer.