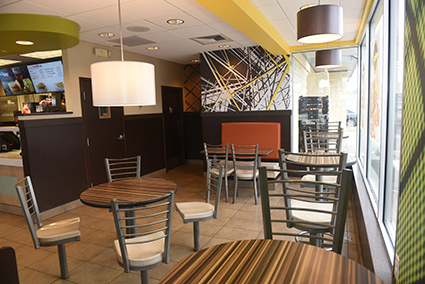 Fourteen McDonald’s in the city of Detroit are undergoing a wide range of updates that include upgrading the exterior, remodeling the lobby, adding new building signage, and refreshing the restrooms, landscaping and parking lots, as part of Detroit McDonald’s restaurant owners and the company’s commitment to reinvest in the city.

“The upgrades to the remaining restaurants demonstrate a continuation of McDonald’s more than 50 year relationship with the City of Detroit,” says Francisco “Pancho” Gonzalez, McDonald’s Michigan Region vice president and general manager.  He says the remodeling project is slated to be completed by mid March— at which time each McDonald’s restaurant in Detroit — totaling 28 locations — will have been newly built or renovated.

Other highlights of the remodeling project include new digital menu boards, LED lighting, comfortable cushioned seating, and high-top and low-top tables. The exterior landscaping at each restaurant will complement the local neighborhoods. Gonzalez says McDonald’s has hired Michigan contractors, architects and suppliers to implement the renovations.