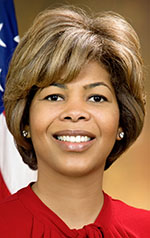 DETROIT – Detroit Mayor Dave Bing has appointed Portia Roberson as Corporation Counsel for the City of Detroit.  The appointment was approved by the Detroit City Council and Emergency Manager Kevyn Orr.  Roberson will lead the City’s Law Department as it provides legal counseling and representation to the Executive and Legislative branches of City government, as mandated by the City Charter.

Roberson is a Detroit native who graduated from Cass Technical High School in 1986. She received a bachelor’s degree from the University of Michigan in 1990 and a law degree from Wayne State University in 1993. Roberson has worked for the U.S. Department of Justice since 2009, when President Barack Obama appointed her to serve as Director of the DOJ Office of Intergovernmental Affairs.

“I am pleased to appoint Portia Roberson as the City’s new Corporation Counsel,” Mayor Bing said. “Portia’s vast legal experience certainly prepared her to take on the challenges that face our Law Department.  Portia exemplifies the best and brightest talent this city has to offer.  I am grateful that after returning to her hometown for a special assignment, she was willing to leave her job with the Obama Administration to help the city she loves.”

In November 2011, Roberson accepted an assignment with the White House Office of Domestic Policy Council and a position as Detroit Team Lead of the federal Strong Cities, Strong Communities Initiative. Detroit was one of six cities chosen by President Obama to participate, which promotes federal collaboration with local and state government to develop regional partnerships that encourage economic growth.

Roberson has served as an Assistant Wayne County Prosecutor, where she was a principal in the community prosecution office.  She also served as an Associate General Counsel at the Detroit Medical Center and as Political Director for Wayne County with the Michigan Campaign for Change.

“I would like to thank Mayor Bing for this opportunity,” Roberson said. “I believe the essential role of law and government is to serve the public, and I look forward to serving the people of Detroit as Corporation Counsel.”