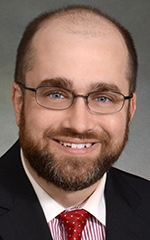 Thomas W. Werner has been promoted to shareholder at the Southfield-based law firm of Maddin, Hauser, Roth & Heller PC.

He also served as clerk to the City of Bloomington legal department, where he aided in municipal litigation before multiple courts, including the Indiana Supreme Court.

Werner, of West Bloomfield, earned his Bachelor of Science in political science and creative writing from Eastern Michigan University and his juris doctor from the Indiana University School of Law in Bloomington, Ind., where he served as an editor to the Federal Communications Law Journal.