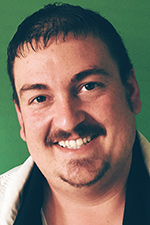 Robert Johnson has been named the chief operating officer for the Macomb County Habitat For Humanity, based in Mount Clemens. He is the nonprofit’s first  COO in its 23-year history. Johnson joined the nonprofit in August 2015 as vice president of retail operations.

Johnson will oversee most areas of the nonprofit, leading the agency’s home construction effort and guiding its deconstruction work. MCHH aims to build or rehab eight to 10 homes this year. Johnson will continue to manage the retail operations at both Macomb Habitat ReStore locations. Last year, the Macomb Habitat ReStores exceeded $1 million in sales.

Previously, Johnson worked in the metro Detroit golf industry, holding a variety of management positions. Recently, Johnson was elected to the board of the Mount Clemens Lions Club.

Johnson, of Westland, earned his bachelor’s in business administration from Virginia College.