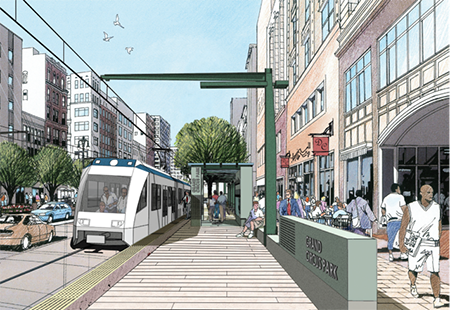 DETROIT — M-1 RAIL today announced it has selected Stacy and Witbeck, Inc., the firm responsible for building the first modern streetcar in the United States in Portland, Oregon, to serve as Construction Manager/General Contractor for the construction of the 3.3-mile Woodward Avenue streetcar in Detroit. M-1 RAIL is slated to break ground by early fall between Larned Street and Adams Street in downtown Detroit.

“Stacy and Witbeck is an established leader in the construction of streetcar systems located in urban cores,” said M-1 RAIL Chief Operating Officer Paul Childs.  “The company is uniquely qualified to manage all of the moving parts associated with a project of this scale.  Stacy and Witbeck set the standard for how to construct the best modern streetcar lines in the United States, and Detroit deserves to have nothing short of the best working on its streetcar project.”

Detroit-based White Construction is a 24-year-old firm that will serve as a key local contractor on the M-1 RAIL streetcar project. The company has also played an important role in other major downtown Detroit construction projects, including:  Comerica Park, Ford Field, Campus Martius Park, the Detroit RiverWalk, Detroit Port Authority, and most recently the City of Detroit’s Public Safety Headquarters.

“We are pleased to be working with Stacy and Witbeck as part of its team of local subcontractors that will construct this historically significant Detroit transit project,” said W. Bernard White, P.E., President, White Construction.  “M-1 RAIL will benefit from having the very best in local and national construction expertise working together over the next couple of years to complete this project.”

According to Tom Gilman, CM / GC Project Manager for Stacy and Witbeck, “Our team is honored to have been awarded the opportunity to work in Detroit. We have done our homework on what it will require to successfully construct a streetcar along Woodward Avenue.”  Gilman added that his team is “confident that with our experience of building streetcar lines, combined with the local knowledge White Construction brings with its portfolio of major downtown Detroit construction projects, and the talented local subcontractors that will join us, we have the right formula to successfully build a state-of-the-art streetcar line for Detroit.”