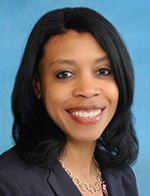 Lena Wilson has been promoted to executive director of Lutheran Adoption Service, leading the statewide adoption efforts of a service arm of Samaritas, a faith-based nonprofit, previously known as Lutheran Social Services of Michigan.

Previously, Wilson oversaw Lutheran Adoption Service across the Lower Peninsula. In her tenure, she has improved overall effectiveness and increased the number of completed adoptions by 35 percent.  Before that, Wilson was a foster care program manager and was an administrator for the Salvation Army Denby Center in Detroit.

Wilson, of Oak Park, earned her Bachelor of Arts in psychology and her juris doctor from the University of Detroit Mercy.