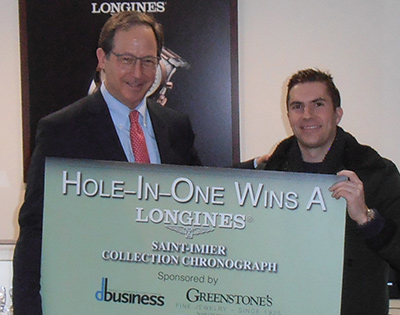 Brad Leitch, a club repair specialist and cashier at Carl’s Golfland, was presented with a Longines Saint-Imier Chronograph watch; a prize for hitting a hole-in-one at the Lochmoor Golf Club in Grosse Pointe Woods during the “Rounds for Rescue” outing last August sponsored by DBusiness. The event was held to benefit the Detroit Dog Rescue.

Leitch, of Livonia, says this was his first ever hole-in-one in his nearly 20 years of playing golf. He says he plays nearly 100 times a year and his favorite courses include Arcadia Bluffs and Forest Dunes. His hole-in-one was made on Hole No. 8 using his 8-iron.

The watch was presented by Robert Greenstone, owner of Greenstone’s Fine Jewelry in Birmingham and sponsor of the DBusiness’ hole-in-one contest along with the Golf Association of Michigan.