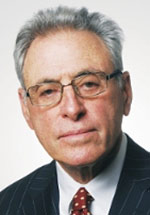 BIRMINGHAM — Norman Lippitt, a founding partner of the law firm Lippitt O’Keefe Gornbein PLLC in Birmingham, has been recognized as one of the nation’s leading attorneys by the National Association of Distinguished Counsel.

Lippitt, of Bloomfield Hills, recently was named to the association’s 2015 list of The Nation’s Top One Percent, a class of advocates representing the legal profession’s finest leaders.

A prosecutor, criminal defense attorney, circuit court judge, and a private practitioner specializing in civil litigation, Lippitt has been the recipient of numerous professional honors. A former vice president of the Michigan State University College of Law’s board of trustees, he was named a Trustee Emeritus in 2010. He also is an active member of State Bar of Michigan and the Oakland County Bar Association.

Lippitt is a graduate of the Detroit College of Law, where he subsequently received an honorary Doctor of Laws Degree for his long-standing service to the school.