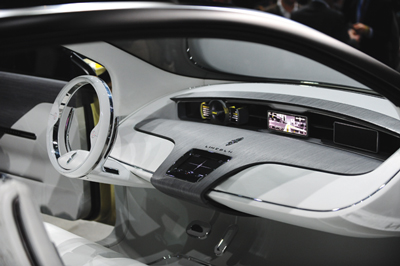 While it may conjure up images of Stanley Kubrick’s 2001: A Space Odyssey, the futuristic Lincoln C Concept, unveiled in January at the North American International Auto Show in Detroit, was equipped with what’s believed to be the world’s first human-machine interface. It works like this: A driver develops a lifelike custom avatar, complete with a personalized name, that appears on a sophisticated computer screen set in the dashboard.

“Eva, could you please call Frank’s office and see if he’s available for lunch tomorrow at Sergio’s?” a female driver might say. “I want to discuss Project X with him. Also, I remember reading some background on the project in The Wall Street Journal. Could you pull that up and read it back to me?” A few seconds later, “Eva” corrects the driver by telling her that the article actually appeared in The New York Times and proceeds to read the piece. After a few paragraphs, the driver asks Eva to forward the story to her desktop, and then asks the avatar to map out the most fuel-efficient route to the restaurant.

In an instant, Eva produces a digital map and outlines the journey. The interface also confirms that Frank can meet her at the restaurant at noon. The avatar, which never gets rattled and exudes a pleasant personality, may be the most efficient personal assistant ever created. J Mays, Ford’s group vice president of design, says the Lincoln C takes the most “engaging technologies and wraps them in a design fit for today’s urban luxury customer.” Judging by the positive reaction to the vehicle at the auto show, Ford can’t get the technology into its future vehicles fast enough.