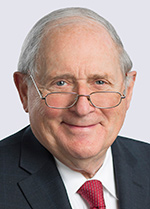 Groundwork is a nonprofit advocacy organization in Traverse City whose mission is to protect the environment, strengthen the economy and build community. Levin is senior counsel in the corporate department at Honigman Miller Schwartz and Cohn LLP in Detroit.

The award recognizes leaders who emulate the legacy of Gov. William Milliken and the late Helen Milliken in their belief that a clean, healthy environment is necessary for a prosperous economy. Groundwork honored Levin for his many environmental accomplishments for Northwest Michigan as a U.S. Senator, including:

Levin, of Detroit, who served 36 years in the U.S. Senate, focuses his legal practice on assisting publicly and privately held companies in identifying and addressing legal, business and reputational risks that may bring them under public or government scrutiny and result in legal action or loss of business.

Levin earned a Bachelor of Arts from Swarthmore College in Pennsylvania and his juris doctor from Harvard Law School.