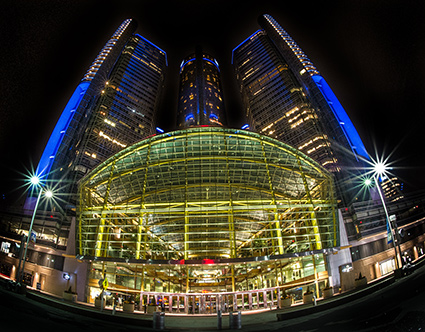 Along with the top 10 landmarks selected in a prior round of voting, the GM riverfront headquarters will be constructed from Lego bricks and displayed in Miniland when the attraction opens next spring. The GM Ren Cen  model will be unveiled onsite at a special event early next year.

“Not only is the GM Ren Cen an iconic part of the Detroit skyline, but it is a symbol of Michigan’s industry, culture and spirit of innovation,” says Hayley Anderson, general manager for Legoland Discovery Center Michigan.

To achieve the top vote, the GM Ren Cen was chosen by fans from nine other  Metro Detroit landmarks that will also be featured in Miniland, including the Spirit of Detroit, Belle Isle, Motown Museum, Fox Theater, Guardian Building, Comerica Park, the Uniroyal Tire, Michigan Central Station, and the Heidelberg Project.