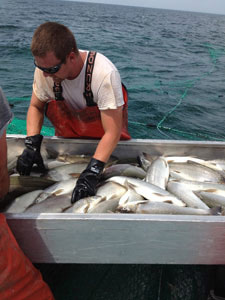 LANSING — The Michigan-licensed commercial fishery caught nearly 3.4 million pounds of fish with an estimated wholesale dockside value of more than $5.8 million, says the 2014 report on the industry from the Michigan Department of Natural Resources.

While the state’s total harvest was about 200,000 pounds less than in 2013, the fishery’s estimated gross dockside value was up $300,000 (more than 5 percent). The increase in the fishery’s value is almost exclusively attributed to a more than 15-percent increase in the wholesale price of lake whitefish. This species’ value has gone up more than 50 percent in the past two years.

“Lake whitefish is by far the most important commercial fish species in the Great Lakes, and a delicious option many consumers will find at their favorite local Michigan restaurant or retailer,” says Tom Goniea, DNR commercial fisheries biologist. “The price of whitefish has been on the rise since 2010, but the increase in demand has accelerated in the past couple of years.”

Participation in the fishery in 2014 remained constant from the previous year. Of the 51 state licenses issued, 31 were actively fished by 20 separate businesses. Eleven of these businesses fished in Lake Huron, five in Lake Michigan, three in Lake Superior and one in Lake Erie. Together, these businesses added an estimated $25 million to the state’s economy and approximately 300 fishing and fishing-related jobs.