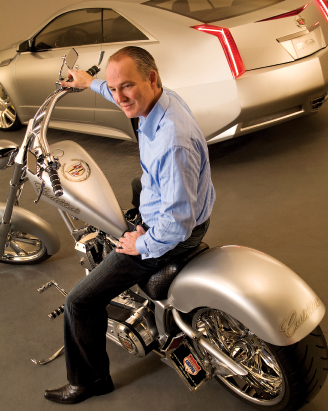 A seasoned rider, Jim Taylor is used to covering long distances in a hurry. But even he wasn’t prepared for the hysteria surrounding the public unveiling of the Cadillac CTS Coupe at the North American International Auto Show in January. “It was an immediate shot in the arm for Cadillac, and the fact that we kept it a secret fell into the ‘minor miracle’ category,” says Taylor, general manager for Cadillac. Now on a world tour, the lone CTS Coupe (designed entirely at GM’s Technical Center in Warren) will likely be approved for production. “The Coupe project came on so fast, we didn’t have time for photos,” Taylor said during a recent shoot at FPI Studios in Auburn Hills. To further broaden Cadillac’s appeal, Taylor, who owns a 1994 Harley-Davidson Heritage Softail Nostalgia, commissioned a themed bike from Great American Chopper in Clawson (left). Now a second chopper is in the works. Vic Ventimiglia, managing member of V20 Consulting in New York, is designing a hybrid bike that will run on both electricity and ethanol. “The idea is to show off GM’s strength in science and technology,” Ventimiglia says. “The bike will go from 0 to 60 mph in 4.5 seconds, and we plan to unveil it at the Los Angeles Auto Show [in November].”