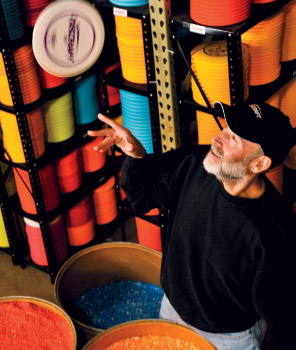 Jim Kenner took a business he started in his parents’ rec room in the 1970s and built it into one of the dominant companies in the outdoor recreation industry. “If it’s not a Discraft, it’s just a piece of plastic,” says Kenner, CEO of Discraft Inc. in Wixom. Along with his wife, Gail McColl, the pair now sell hundreds of thousands of sportdiscs a year at prices ranging from $6 to $20. While it wasn’t an overnight success — 3,000 discs were sold in 1979, the company’s first year — the Kenners proved that steady and measured growth could match up with such big-name competitors like Mattel Inc.’s popular Frisbee. “We appeal to three main sports — Disc Golf, Freestyle, and Ultimate, which is a seven-on-seven team game,” says Kenner, 60. “The overall industry grows about 10 percent a year, and we pretty much match that. We’re also a bit recession-proof because it doesn’t cost a lot to play the sport.” About 80 percent of Kenner’s sales are in the United States and Canada, followed by Europe, Japan, Australia, and elsewhere. The company’s product line, which includes patented discs, bags, towels, and shirts, is complemented by disc-course design and competitive tournaments. “Just like conventional golf, technological advances have led to improved distance,” Kenner says. “Twenty years ago, a disc might travel 550 feet, where today the best players can reach 800 feet.”