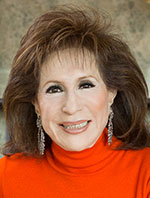 Florine Mark has been named the national spokesperson and honorary chair for the New York-based Jewish National Fund’s new Professional Women’s Division. She will be responsible for leading the new division, increasing awareness of the organization, attracting more women to the organization, fundraising, and promoting the charity and community programs organized by the Jewish National Fund in the United Stated and Israel.

The new division will enable professional women who are passionate about Israel to connect over topics ranging from business to building the Jewish community and network.

Mark is the president and CEO of Weight Watchers Group, a Farmington Hills-based company that assists in weight loss. She is the chairman of the board of the Jewish Community Center of Metropolitan Detroit; on the board of trustees of the Jewish Federation of North America; chair of the Federal Reserve Bank of Chicago; board member of Harvard University’s Kennedy School of Government women’s Leadership Board; and sits on the board of visitors for Wayne State University School of Medicine.