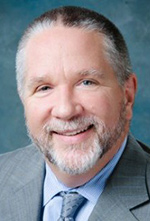 JARC, a nonprofit in Farmington Hills that serves people with developmental disabilities and their families, has named Robert Blumenfeld as its new chief executive officer.

Blumenfeld, of Farmington HIlls, has experience in both the private and non-profit sectors, and has spent nearly 30 years working with organizations in the human services field.

Most recently, Blumfeld served as chief financial officer at The Children’s Center, a Detroit-based agency which provides comprehensive programming in the mental health, child welfare, and educational areas. His role extended beyond finance where he provided support to the organization’s human resources, IT, campus operations and quality.