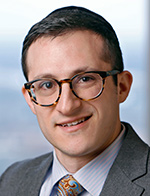 Previously, Ungar served as a law clerk to Judge Mark A. Goldsmith in the U.S. District Court for the Eastern District of Michigan and a patent examiner at the U.S. Patent & Trademark Office. He is a member of the board of trustees for the Congregation Young Israel of Southfield and is involved with the startup community in the metro Detroit area.