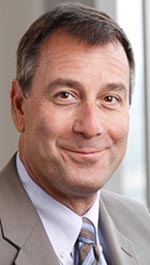 Welford was selected for the President’s Cup by a special committee made up of CLLA board members, a previous recipient of the President’s Cup and a member of the American Lawyers Quarterly Company. The President’s Cup is the CLLA’s highest honor, and is commensurate with the guidelines established by the American Lawyers Quarterly — a directory of law firms that specialize in collections, creditors’ rights and bankruptcy. Since 1964, the award has been presented to a recipient who has shown outstanding service to the organization and also leads a personal and professional life that is respected by the community.

“For the past 30 years, our clients and colleagues have had the pleasure of working with Jay and benefiting from his first-class legal counsel,” said Sider. “This industry award represents Jay’s well-regarded character and leadership, and it is an honor to have him on the Jaffe team.”

Throughout his career, Welford has received multiple legal honors and awards from Michigan Super Lawyers, Best Lawyers and DBusiness. He is an active member in multiple business and legal associations, including the American Bar Association, American Bankruptcy Institute and the International Franchise Association. Currently, Welford serves as president of the nonprofit organization ALS of Michigan. He received his bachelor’s degree in business from the University of Michigan and his law degree from Wayne State University Law School.