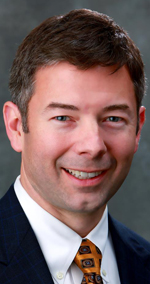 “Kevin brings extensive knowledge, experience and leadership to the human resource organization and ITC,” said Linda Blair, executive vice president and chief business officer. “His accomplishments align with ITC’s core values of employee and operational excellence and support our vision of being the nation’s premier electric transmission provider. We are thrilled to have someone of his caliber join the ITC team.”

Burke holds a Bachelor of Arts and Master of Arts from Michigan State University and a Master of Business Administration from Northwestern University.