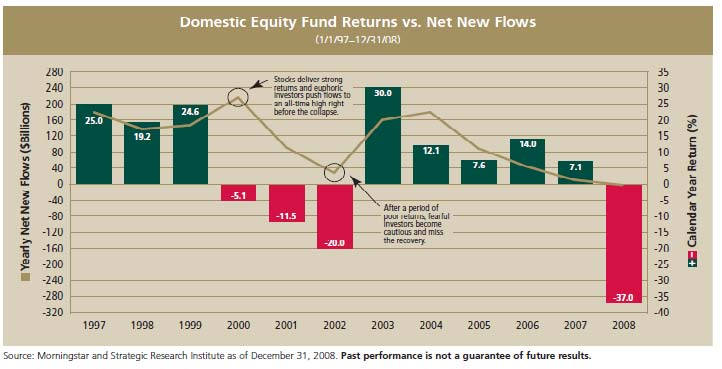 Author Nick Murray once said (and continually trumpets): “The dominant determinant of real-life, long-term investment outcomes is not investment performance; it is investor behavior.”* In reading an article from The Wall Street Journal on December 31, 2009, Eleanor Laise reported the best performing mutual fund of the decade, and with this one article, Nick’s words siren back as if he was performing a Nostradamus.

You see, the fund that Eleanor was describing was the $3.7 billion CGM Focus Fund and according to The Wall Street Journal, which used Morningstar research, it had an astonishing return of 18 percent per year for the last decade, ending December 29, 2009. Any investor that was an owner of equities over the last decade surely will attest…this thing knocked the cover off the ball. And I know what you’re thinking, since we tend to have a rear view mirror approach to most things in life, I MISSED IT. Now, before you pick up the phone to have a “conversation“ with your financial advisor, it seems as if even those who owned the fund missed out.

According to Morningstar, the average shareholder of the fund during the same decade had a loss of 11 percent per year. Wait…how was it that the fund returned 18 percent and the average investor in the same fund lost 11 percent, the funds Dollar-Weighted return. A quick refresher, 18 percent is the fund’s Time-Weighted return, which is for a specific period of time (what the manager did). On the other hand, the Dollar-Weighted rate of return (-11 percent) is the actual returns that average investors received based on either adding or pulling monies out. When asked about the gap between his returns verses the average shareholder, the fund manager, Mr. Heebner said: “A huge amount of money came in right when the performance was at a peak…We don’t have any control over what investors do.” To be more precise, just after the fund surged 80 percent in 2007, investors poured in $2.6 billion at the peak. Soon afterward, it plunged 48 percent. In addition, by November of 2009, investors had pulled out $750 million.

How could this happen? As the chart below from Davis Advisors reveals, if you track the net money flow (grey line) of all Domestic Equity funds since 1997, you can see that investors have historically poured money in right after the markets peak (shown as the bars) and then sell as the market pulls back.

To recap, lets take a walk down rear view mirror lane; 1) as the market/fund just came off an incredible year, more money was added at a higher price 2) when the markets were in turmoil, money was pulled out at the low 3) the manic-depressive cycle of buying high and selling low continued. This is what I see happen so often. And with this truth, it reveals one of the real risks to investors…don’t move away from (with your behavior) the equity returns needed to help cover an income that must rise in retirement to fight the rising costs of inflation.

Mutual funds are sold by prospectus. Please consider the investment objectives, risks, charges and expenses carefully before investing. The prospectus, which contains this and other information, can be obtained by calling your financial advisor. Read it carefully before you invest.
*Nick Murray Interactive-Volume 10-Issue 2-February 2010

This article was written by Lou Melone, Managing Partner, with Budd, Melone & Company in Auburn Hills, MI. Lou Melone can be reached at 248.499.8704

Wells Fargo Advisors Financial Network did not assist in the preparation of this article, and its accuracy and completeness are not guaranteed. The opinions expressed in this report are those of the author and are not necessarily those of Wells Fargo Advisors Financial Network or its affiliates. The material has been prepared or is distributed solely for information purposes and is not a solicitation or an offer to buy any security or instrument or to participate in any trading strategy.