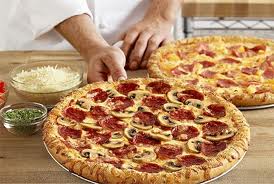 It has been about a year and a half since Domino’s unveiled their “new pizza” recipe, and looking at the NYSE today, its success is clear. The international company has been through a lot of changes since its early beginning in the 1960s, and has proven when the going gets tough; they know how to bounce back.

According to stock market trends over the years, it is clear that pizza and other affordable foods can thrive in a downtrodden economy. And thriving they are: the company’s (NASDAQ: DPZ) stock is up 131.8 percent from July 2010, almost 100 percent higher than other pizza giants such as Pizza Hut and Papa John’s. Analysts call Domino’s stock a “strong buy.”

In 2008, Domino’s stock was suffering, selling for $11.75 per share, while today it averages around $24 per share. Thanks to changes in its pizza recipe, the very first since the company was started in 1960, Domino’s has come full circle … and then some.

At the time, Tom Monaghan and his brother, Jim, took over Dominick’s Pizza in Ypsilanti. While Tom had a vision to turn the store around and eventually grow as a company, his brother gave up after eight months and traded his 50 percent share for Tom’s old Beetle. Tom continued to work on his dream and moved on without his brother’s help.

By the 1980s, Tom Mongahan had successfully turned Domino’s (the name was changed during a new partnership in 1963) into a world-recognized brand. But changes were needed in the early ’90s when sales began to suffer, bringing the company headquarters from Columbus and Minneapolis back home to Ann Arbor’s Domino’s Farms for good.

In 1998, Monghan sold a controlling 93 percent stake in Domino’s to Bain Capital, Inc. for about $1 billion (and the assumption of about $50 million in Domino’s debt). David Brandon stepped in as CEO in 1999 and continued the turnaround that gave pizza-lovers the HeatWave bag and the infamous slogan, “Get the Door. It’s Domino’s.”

Since March 2010, CEO Patrick Doyle has continued to guide the Ann-Arbor based business to success. After the much-needed recipe change in 2009, sales are at an all time high, and the business continues to grow internationally.

“We are about 15 to 18 months from having more stores and retail sales outside the U.S. than inside,” Doyle says. “We move very fast in international markets. When we see opportunities, we act on them.” The versatility of pizza (a store can easily add toppings to fit almost any local culture) and its affordability enable the company to move forward in the global economy.

But just because they are buying up more stores in foreign countries doesn’t mean Domino’s isn’t focusing on the home front. In the past, Domino’s Pizza has struggled to find continuity within its franchises, whether it was constant menu changes or customer satisfaction. Recent commercials now show CEO Doyle himself humbly stressing excellent service. In order to prove its commitment to great customer service, local franchisees have hired new owners and managers at locations that have had slow sales in the past. The new strategy has paid off; as of January 2011, total retail sales growth was up 12.2 percent from 2009, the last quarter accounting for 6.6 percent of the same store growth.

While it is one thing to compare the new Domino’s to the old Domino’s, it becomes an entirely separate issue when it comes to comparisons with competitors. Long time competition within the pizza world includes YUM! Brands’ Pizza Hut division, Papa John’s, and Little Caesar’s. While Domino’s is still number two on paper, the current state of the stock market is showing changes on the horizon.

But Domino’s has brought its A-game, and has ended on top. In the last year, Domino’s stock climbed at a rate two times faster than Pizza Hut and Papa John’s combined. Domino’s strategy of a simple menu and fast delivery seems to be the golden ticket to success in this fast-paced and customer-driven economy. In just the past three months, stock for Domino’s has gone from a high of $16.75 to a high of $26.16, while Papa John’s has stayed steady, with its stock rising from about $30 on March 1 to about $32 today.

Pizza Today, a widely distributed industry publication, has even named Domino’s the Chain of the Year two years in a row: last year in 2010, and again last month. Jeremy White of Pizza Today says, “As the pizza category shows its resilience and continues to pick up steam, there is little doubt that Domino’s Pizza has had a heavy hand in igniting the industry-wide turnaround. The company’s bold product revamping and hugely effective advertising platform has drawn the interest of the public and Wall Street alike, and the result has been a renewed enthusiasm in the world of pizza.”