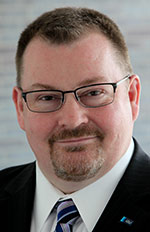 NORTHVILLE — Andy Ridgway has been promoted to president of IAV Region Americas and is now responsible for overseeing the company’s South American operations, in addition to his North American responsibilities.

Previously, Ridgway served as president of IAV Automotive Engineering Inc., where he was responsible for continued business growth and expansion of IAV’s product and service portfolio in North America. In his new role, Ridgway will lead Brazilian operations and oversee business strategy and development.

Prior to joining IAV, Ridgway held various positions in the automotive industry, gaining experience with various technologies. Most recently, he was president of Valeo Thermal Systems, NAFTA Region. Ridgway spent many years at General Motors where he assumed several executive functions in vehicle manufacturing and was responsible for launching production of new vehicles both in the U.S. and Germany.

He earned a Bachelor of Engineering in production engineering from Coventry University in the U.K.