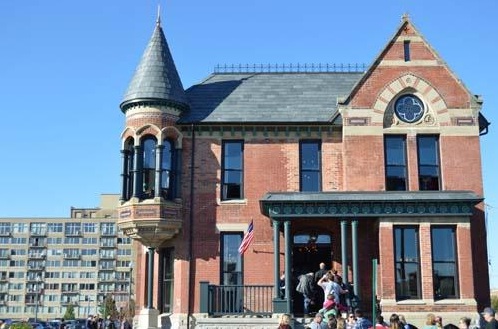 Curtis, of Lake Orion, and her team of volunteers and contractors took nearly four months to rebuild and renovate the nearly 4,800-square-foot home on the corner of Alfred and John R streets. The house was reconfigured into a duplex with initial plans are to occupy the homes with renters. The cost of the renovation was not disclosed on Sunday.

“(This project) is important to the revitalization of Detroit,” says Jay Farner, Quicken Loans president and chief marketing officer. “We wanted to maintain the history and character of the home and the neighborhood.”

The project is part of a partnership announced in May with Quicken Loans and Detroit-based Brush Park Development Co., an organization created by Bedrock Development Co. dedicated to invest $70 million developing an 8.4-acre site in Brush Park with historic and new residences, mixed use retail, and green space. Three more houses on Alfred built between 1876 and 1878 are next in line for renovation to start in a couple months.

Fans of Curtis and others began lining up at 10 a.m. prior to the 2 p.m. opening and wrapped around the entire city block and down another street. The tours ended around 6 p.m.

The number of people waiting in line was “unbelievable,” Farner said. “For us to be a part of this — to take one of the premier homes in the city of Detroit and bring it back to what it once was — is great.”

The renovation process of the once crumbling Venetian Gothic home will be aired as an eight-part series titled Rehab Addict: Detroit premiering at 9 p.m. Thursday, on HGTV. The series, hosted by Curtis, follows the joint project of restoring the historic home led by skilled local contractors and community volunteers.

For photographs of the tour, visit  bit.ly/20oo5j9