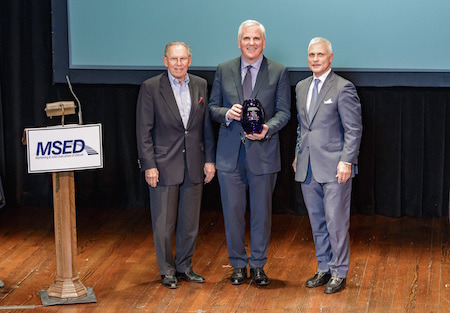 The Marketing and Sales Executives of Detroit (MSED) awarded Matthew Cullen, principal of Rock Ventures LLC and CEO of Detroit-based JACK Entertainment LLC, with the Herb Everss Lifetime Achievement Award at the 23rd annual Evening of Excellence, which was held at the Gem Theatre in Detroit on March 27.

Named after Herb Everss, a founder of MSED, the distinction is given to outstanding business leaders who have made a significant impact in their company, industry, and communities.

“Matt Cullen is the dictionary definition of a visionary who has generated a paradigm shift in how potential investors now view Detroit,” says Dave Harries, chairman of the MSED Evening of Excellence and president of Spartan Marketing Services.

Cullen has helped bring thousands of new workers and residents, as well as hundreds of companies, to Detroit and helped to change the way people invest in Detroit. Rock Ventures has invested more than $2 billion in the central business district of Detroit to date and is planning to invest of an additional $2 billion in coming years.

As a 29-year veteran of General Motors, Cullen served as general manager of economic development and enterprise services. He coordinated economic development initiatives in the communities where GM operates, created a shared services organization, and was responsible for the corporation’s 450-million-square-foot global real estate portfolio. Additionally, he was chief architect of GM’s $500-million acquisition and development of the Renaissance Center as its global headquarters. As the founding chairman of the Detroit Riverfront Conservancy, Cullen has helped to oversee the billion-dollar redevelopment of Detroit’s international riverfront since 2003.

“I am honored to receive the prestigious Herb Everss Lifetime Achievement Award,” says Cullen. “Throughout my career, I have been fortunate to have worked with companies and individuals that, while focused on business success, were also very motivated to be strong champions of their communities.  That philosophy of doing good while doing well has really become a part of who I am, and my efforts to support the renaissance of my hometown have certainly been amongst the most rewarding experiences for me.”

Cullen also serves as volunteer president and CEO of the M-1 RAIL Streetcar initiative. He received two other awards from MSED, including Marketing Innovator of The Year in 2000 and the Executive Leadership Award in 2007. Proceeds from MSED events support the Detroit marketing and sales community through educational programming and collegiate scholarships.

JACK Entertainment is part of the gaming-hospitality industry. It has gaming properties in downtown Cleveland, Cincinnati, Baltimore, and Detroit, and racing facilities in Ohio and Kentucky. The company’s portfolio includes 7,000 team members, more than 13,000 gaming positions, 400 hotel rooms, 48 bars and restaurants, 400,000 square feet of gaming space, and generates more than $1.2 billion in revenues.