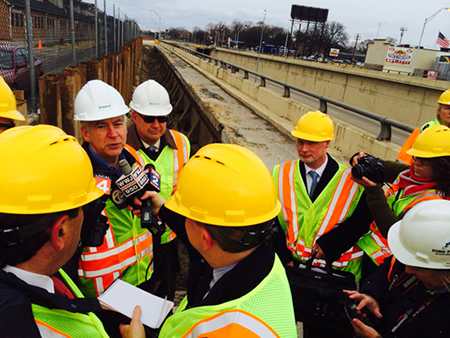 SOUTHFIELD — Gov. Rick Snyder today called for the legislature to approve a plan to raise $1.2 billion annually for repairs to Michigan’s deteriorating roads and bridges.

“The message from every corner of our state is clear,” Snyder says. “It’s time to fix the roads. Michiganders are tired of dodging potholes, whether it’s on the highway or in their neighborhoods. They’re fed up with getting socked with auto repair bills because Lansing has ignored the problem for too long.”

The governor reviewed the initiative today with Southeast Michigan community leaders during a roundtable at Lawrence Technological University after inspecting aging infrastructure along M-10/Lodge Freeway between McNichols and Meyer roads.

Crumbling roads and bridges have a significant impact on the state. An estimated 100 lives can be saved each year if Michigan improves its infrastructure, according to a 2012 analysis by The Road Information Program. One in nine bridges across Michigan are rated as “structurally deficient,” which means their conditions show deterioration.

Additionally, the organization estimates that poor roads cause an average of $539 in additional annual vehicle operating costs due to repairs, tire wear, and increased fuel consumption.

Investing in roads and bridges will create about 12,000 direct and indirect jobs, according to the governor’s office.

Michigan hasn’t updated its overall investment on roads since the gas tax was adjusted in 1997.