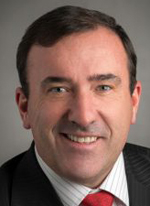 DETROIT — General Motors has named Alan Batey as senior vice president, Global Chevrolet, which accounts for more than half of GM’s sales worldwide. Batey will also serve as the head of U.S. Sales, Service and Marketing for Chevrolet, Buick, and GMC.

In his global Chevrolet role, Batey will report to GM Chairman and CEO Dan Akerson. In his U.S. Sales, Service and Marketing role, he will report to Mark Reuss, president, GM North America. Batey will also be a member of GM’s Executive Operations Committee. He had been vice president, U.S. Sales, Service and Marketing and interim global chief marketing officer.

“Chevrolet is our mainstream global brand, and with the growth we are experiencing and the barrage of new products we have coming, the time is right for us to have a single leader responsible for managing the brand around the world,” said Akerson. “Alan Batey has worked in markets all over the world, has demonstrated the ability to deliver great business results and understands how to balance global brand consistency while maintaining the local voice of the customer.”

Batey began his career with General Motors in 1979 as a mechanical engineering apprentice for Vauxhall in the United Kingdom. He has held senior management positions in the U.K., Switzerland, Middle East, Netherlands, Germany, Korea and Australia.  Prior to joining Chevrolet in the U.S. in 2010, Batey served as chairman and managing director, GM Holden Ltd. Operations, in Australia and New Zealand.