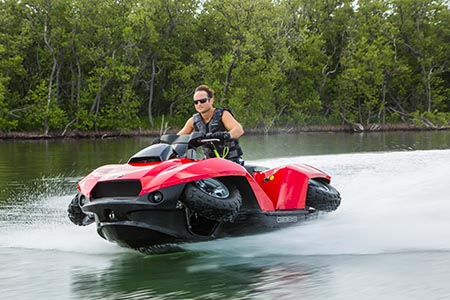 The company is on track to build 1,000 Quadskis in 2013 and expects to have more than 100 major powersports dealers authorized to sell and service the Quadski by the end of 2014. Gibbs also plans to announce the selection of its first Michigan dealer this summer.

Speaking at a Tech Crawl 2013 press conference at Pine Lake Country Club in Orchard Lake, Gibbs Communications Manager Graham Jenkins added that the company is selecting prospective dealers and distributors to support high-speed amphibian export sales in 2014 and will add jobs at its assembly plant as products are added to its lineup.

“Our primary focus over the past 12-14 months has been a successful Quadski production launch and the establishment of a strong, premium U.S. dealership base, primarily in the Midwest, New York, Texas, and the southeastern United States,” Jenkins said. “West Coast sales currently are on hold pending California regulatory approval.”

He said Europe, the Middle East, and select markets in the Asia Pacific region are all prospective Quadski export targets in 2014 and beyond.

The company plans to launch several new consumer products over the next 18 months and continues to work on commercial and military high-speed amphibian applications as well. Gibbs already has shown two commercial concepts referred to as amphitrucks. The Gibbs Phibian is a 4,500-pound, 12-passenger high-speed Amphibian equipped with twin turbocharged diesel engines. The Humdinga is a smaller amphitruck designed for five to seven passengers and equipped with a supercharged V8 engine.

The Quadski made its debut at major boat and auto shows in the United States earlier this year, including the Miami International Boat Show and the North American International Auto Show in Detroit. Quadski transitions from land to water in less than five seconds; is equipped with a BMW Motorrad engine, and is currently available in five colors: black, blue, red, silver, and yellow.

“Quadski is the only personal sports amphibian capable of reaching speeds of 45 miles per hour on both land and water,” Jenkins noted. “Quadski’s unique retractable suspension provides superb ride-and-handling on land and retracts in seconds after entering water.”