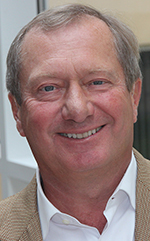 Denton, of Birmingham, brings more than 40 years of automotive and executive leadership experience to Ghafari. He will be responsible for overseeing the firm’s process engineering practice as well as advancing its strategic growth objectives.

Previously, Denton served as president of Nobel Automotive, where he tripled sales in four years. Before that, he was chairman, CEO and president of DURA Automotive Systems, where he developed a restructuring plan that enabled the automotive supplier to emerge from bankruptcy in less than 20 months. He was also president of Dow Automotive for nearly 10 years and spent nearly 25 years with Ford Motor Co., where he held a variety of senior management positions.

Denton holds a bachelor’s in civil engineering from Michigan State University, a master’s in science from the Massachusetts Institute of Technology,  and a Master of Business Administration from the University of Michigan.