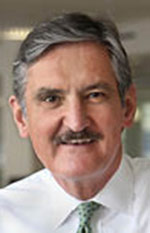 DEARBORN — Raymond S. Clark has joined Dearborn-based Ghafari Associates as executive vice president. In this role, he will be responsible for overseeing Ghafari’s operations in Chicago and expanding its service offerings in new strategic markets.

With a career spanning over 35 years, Clark has worked in design leadership, project management, and business development. Previously, Clark worked at HOK, where he served as managing principal of its Chicago office. He previously led Perkins + Will’s Chicago and London practices as managing director, overseeing a variety of large-scale commercial projects.

Clark is a registered architect and holds a Master of Architecture and a Bachelor of Science in Architectural Studies, both from the University of Illinois at Urbana-Champaign. He is affiliated with a number of industry organizations, including the Urban Land Institute, the American Institute of Architects, the Chicago Committee on High Rise Buildings, the Council on Tall Buildings and Urban Habitat and the Chicago Central Area Committee.