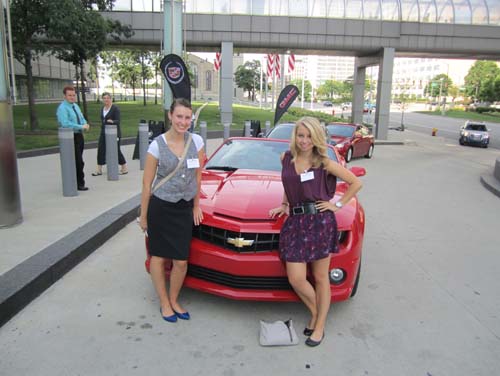 There’s nothing quite like a ride in a 2011 Chevrolet Camaro convertible through downtown Detroit to demonstrate how far the city has come in these past few years.

We have slipped and tumbled down a decades-long slope towards irrelevance. But we survived. And we are coming back with a vengeance — new, improved, and innovated. At least, that’s the outlook that General Motors Co. has for the city.

Most, if not all, of those with ties to the city recall the feeling of immense pride that swelled during the recent Super Bowl, when Chrysler aired a first-of-its-kind, two-minute commercial proclaiming to all that we are “Imported from Detroit.” But a visit to General Motors’ Renaissance Center proves that Chrysler is not the only company that is simultaneously reinventing itself, and it’s hometown.

General Motors began a “reinvention campaign” in 2009, spearheaded by downsizing from six to four core brands: GMC, Chevrolet, Buick, and Cadillac. Focusing on a smaller amount of brands allows the company to become stronger and more innovative, which, according to General Motors’ officials, is a must in today’s helter-skelter economic conditions. But the company has not just reinvented its tangible qualities. There are also the intangibles: How it thinks, and whom it thinks about.

GM seems to have realized that the next generation, “Generation Y,” or “The Millennials,” is growing up with specific needs. For one research effort, at least, GM’s Detroit executives are looking no further than interns, both internally and from local media companies.

Numerous students planned and hosted the company’s first Ride and Drive event exclusively produced by interns for interns. A novel and innovative idea, the General Motors Intern Ride and Drive was hosted at the RenCen on July 22.

Interns were invited to drive and ride in a fleet of vehicles from each of the four core GM brands, which included the Chevrolet Volt, Sonic, Corvette, Cruze, and Camaro; GMC Terrain, Buick Regal, and Lacrosse, and the Cadillac CTS Coup.

Due to insurance restrictions, only those interns who were above the age of 21 were able to drive the featured vehicles. But even just riding along provided an effective demonstration of each car’s capabilities.

Here’s a few of our favorites:

• We have to begin with the 2012 Chevrolet Sonic. A car so new it is not even on the market yet (the entire event was a debut for Chevy’s new featured sub-compact). Designed with a motorcycle in mind, this baby can go from zero to sixty in eight seconds, and although no official EPA estimate has been released, tests have shown gas mileage to be right around 40 mpg. The Sonic proved to be much roomier than it appeared from the outside, and had an excellent response in braking and turning. But the best part? Built in Lake Orion, this 4-door is the only sub-compact car currently built in America, and it’s made of 85 percent recycled materials.

• Since it’s debut as a concept car, the 2011 Chevrolet Volt is finally starting to present itself on a more commercial basis. The hype surrounding this car does it a fair amount of justice. This is not merely a car that recharges at a port in one’s garage: this car recharges as one drives, then automatically switches to gas as the battery drains. Despite the cramped interior, the dashboard is user-friendly and innovative, using a combination of touch screens and buttons to operate the car. And for those weekends in the mountains or camping, there’s “Sports” and “Mountain” modes that rely more on gas for a better ride. Merging on to and off of the freeway was not a problem, as the steering control was responsive and the acceleration was much better than expected from a battery. With several recent local initiatives to build charging stations at accessible locations, the Volt is clearly not just a car for environmentalists anymore.

• Despite it’s lack of battery power, we cannot help but name the 2011 Chevrolet Camaro SS as our favorite. Finally, a car for the Detroiters who are California dreaming. Riding shotgun in the convertible was pure joy; a fast, windy, zippy ride down the freeway. And the acceleration — WOW!. It may not be practical for Michigan winters, but it cannot be denied that the Camaro would be a fun vehicle to own.

In the end, though, what was most impressive was not the cars, but the reaction from the other interns. Whether they were born and raised in Michigan, or here for their first visit, a feeling of newfound appreciation for Detroit was obviously present. It is clear that GM’s new innovations are simply symptomatic of the strides that the city itself is making.

Detroit is reinventing itself. Without the help of the car companies that have helped to define the city’s history, we wouldn’t be speeding into the future. General Motors in particular, is leading the way and is the only one of the “Big Three” to make Detroit their world headquarters. With this kind of innovation right here in the heart of the city, we can’t go wrong.